Each year, thousands of content professionals from all corners of the media, entertainment and technology ecosystem go to NAB Show. It’s designed for those striving to drive listeners and engage viewers in larger numbers for greater reach. And it’s imagined for those seeking to create uncommon audio and visual experiences.

We had a great time at NAB 2022 and enjoyed checking out a lot of new kit and developments from some of the biggest names in the industry. Please enjoy our overview and check back in the coming days for our full rundown from the event.

Sony is one of the leaders in camera technology and at this year’s NAB there are introducing some interesting new products.

With the new HDC-3200, Sony is building out its portfolio and filling in the gaps with a more affordable 4K system. It is a fiber based, cost-effective system camera that shares many of the features common to Sony's HDC-series including a 2/3" type 3CMOS image sensor with global shutter, 4K and HDR and support for numerous signal formats. The HDC-3200 is compatible with the existing line-up of Sony viewfinders, large lens adapters and IP transmission systems. It’s planned to be available in May 2022.

Sony is also introducing two new large lens adaptors, the HDLA-3505 and HDLA-3501. The robust HDLA-3505 can be used with the HDVF-EL70. It has an LCD panel that allows for assignable settings at the press of a button and simple monitoring via SDI Input. The HDLA-3501 complements the new HDC-3200, providing a cost-effective 4K system. It is designed to operate with the HDVF-L750 viewfinder and enables easy access to the camera head while supporting rear panel operation. Both options offer Sony systems cableless interface and instant attachment to and detachment from the camera. They are planned to be available in June 2022. 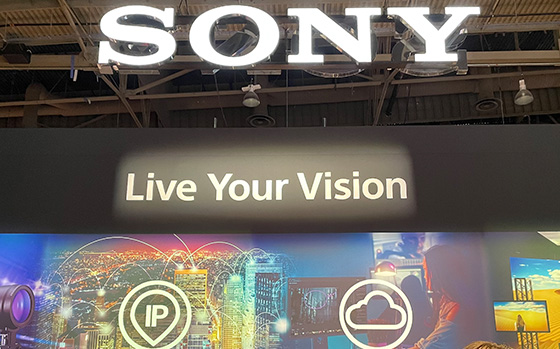 In addition, Sony's PVM-X series 4K, HDR monitors available in 18-, 24- and 32-inch sizes, will see new enhancements with the Version 4.0 firmware release scheduled for August 2022. New features include two new optional licenses to support signal conversion and 3D LUT Output. Timecode and audio output capabilities will also be added to the enhanced monitor output. The firmware will also feature in monitor display, parallel remote and chroma up as well as support for closed captioning.

Sony’s VENICE CineAlta camera is having success in feature films, sports, and live multi-cam productions. Thanks to that success Sony has expanded its Cinema Line with the introduction of the flagship VENICE 2 camera. The VENICE 2 features a new 8.6K full-frame CMOS image sensor, internal X-OCN and 4K Apple ProRes 4444 and 422 HQ recording with a smaller body. It has an impressive 16 stops of dynamic range, extreme low light capability, highlights that roll-off, and natural skin tones. In addition, the VENICE 2 has a Dual Base ISO, 8 stops of built-in ND filters, and is now shipping.

The HDC-F5500 system camera with Super 35mm 4K CMOS global shutter image sensor also enables creative expression with a cinematic look. Featuring shallow depth of field, high frame rate capability, and easy systemization with other Sony system cameras, it has been used on marquee sporting events and the most influential motion picture and music awards events, among others.

Blackmagic showed off it's impressive cloud ecosystem at this years NAB. To add to the impressive feature set of DaVinci Resolve 18 blackmagic has some new hardware releases that will work alongside the companies production hardware and software to offer seamless collabrative working.

The Blackmagic Design Cloud Store and Cloud Store mini were on show offering sollutions of up to 320TB capacity. All of these solutions work seamlessly with Blackmagic's software offering real-time collabrative working and file sharing. 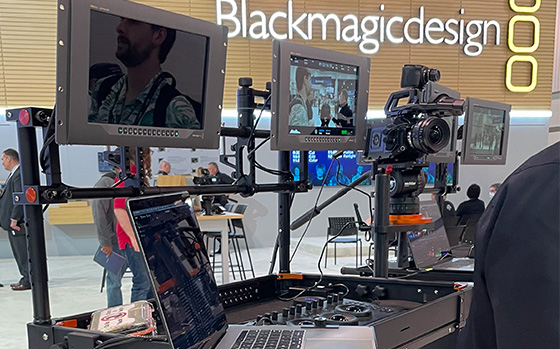 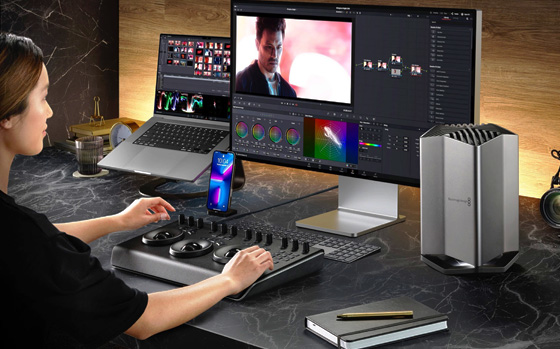 The new Atlas Orion 21mm was being showcased at the show. the 2x anamorphic lens is being introduced as the world's widest anamorphic cinema lens. With a 124 degree field of view and with a relatively light weight, this looks to be a unique offering. 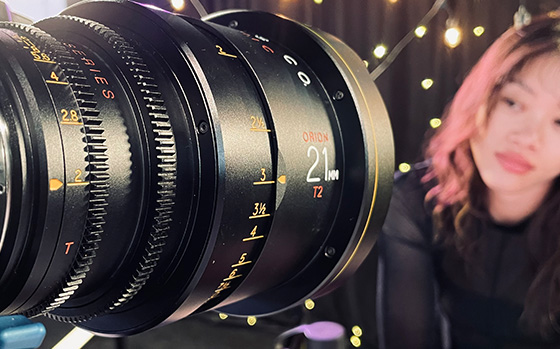 Canon demonstrated their latest firmware updates for their EOS C300 Mark III and EOS C500 Mark II digital cinema cameras. The cameras can now connect directly to the cloud. The company is utilising frame.io's C2C technology in this new update.

The company also showcased their latest Flex Zoom lenses, a 20-50mm and 45-135mm pair of lenses designed for full-frame cinematography. These lenses will come in PL or EF mount and have a T-stop value of 2.4 across the zoom range, Advanced Lens Metadata Support includes Cooke /i Technology™ and Zeiss eXtended Data™ protocols. More info can be found on our blog post here 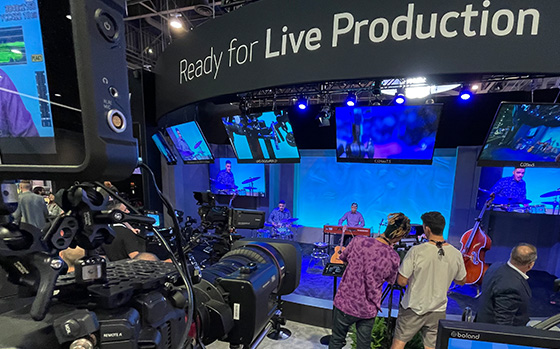 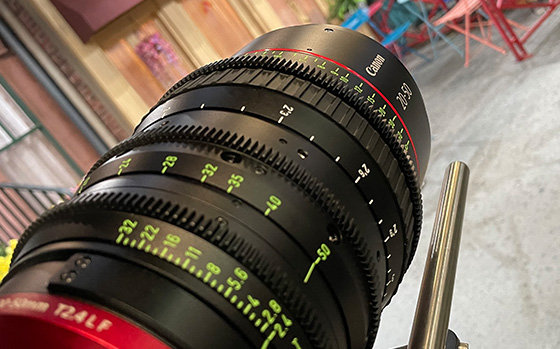 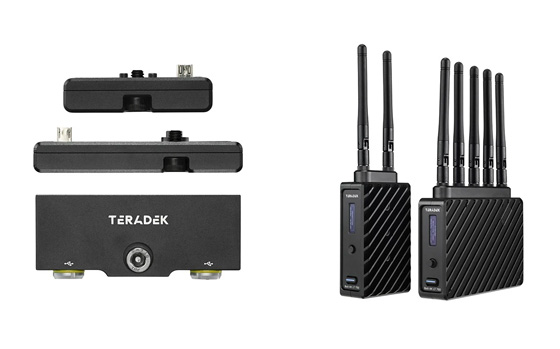 Aputure's big news was the announcement of the LS 600c pro - A full RGBWW lamp with 600 watts of output. This new addition to their popular LS line outputs and impressive 4,150+ lux at 3 meters. 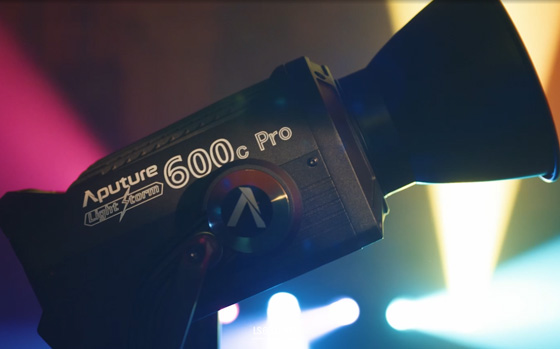 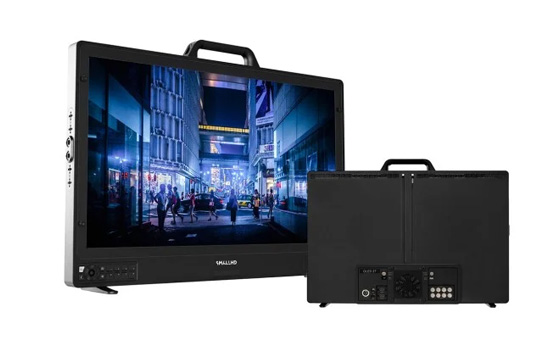 Viten launched a new range of Osprey 2-stage pedestals, plus three OB variants which are available to be quoted or ordered now with the first deliveries expected in late July. These will be replacing some of Vinten's older Osprey 1 and Pro-ped products.

From Vinten: "Vinten 2-stage pedestals are the most popular Studio and OB pedestals in the world. The five new 2-stage pedestals build on the elements that owners and operators love to deliver perfect balance and effortless movement up to 80kg allowing operators to perfectly frame live shots, even in the tightest studios.

The Osprey Plus and Plus S pedestals are shipped with a fitted gas strut that will support 30-55kg (the most common payload range for these peds). They also come with a second gas strut which can be interchanged with the fitted strut which handles payloads from 55-70kg.

All Osprey pedestals deliver the high levels of reliability and durability for which Vinten is known. With a payload range from 0-80Kg they provide a wide range of size and price options to suit every budget and studio size." 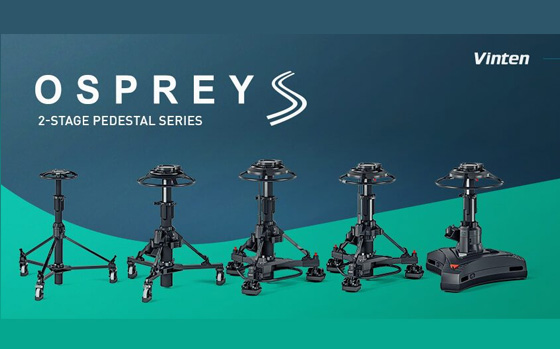 BirdDog brought a new, feature rich PTZ camera to the show. The P120 is premium PTZ camera sporting a Sony Exmor R back-illuminated sensor, 20x optical zoom, NDI, HDMI & UVC USB outputs. The camera has the unique feature of being able to pan and tilt and zoom at the same time. 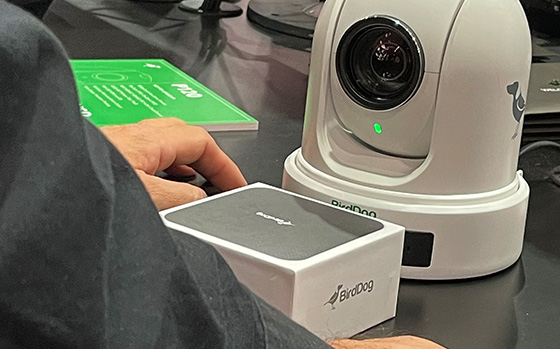 We caught a look at the new Core SWX NANO V50. A compact battery with 4.8V, 49Wh capacity especially made for light rigs. 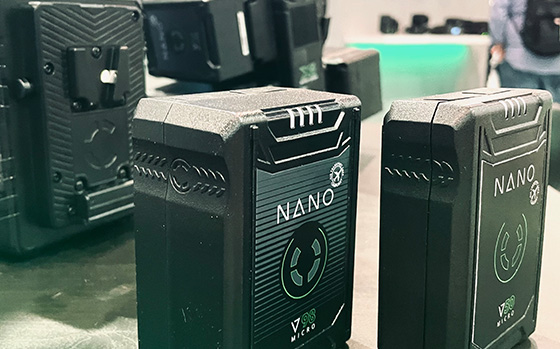 We checked out the impressive SHOGUN CONNECT and ATOMOS CONNECT. The ATOMOS CONNECT fits onto the NINJA V/V+ models and features a 12G SDI interface. Once fitted to the monitors, it leverages ATOMOS AirGlu wireless timecode for seamless synchronizing all of your cameras. Additionally, it offers multiple power options, accommodating a variety of on-set situations.

Atomos also received the NAB Show Product of the Year award for their CONNECT products. 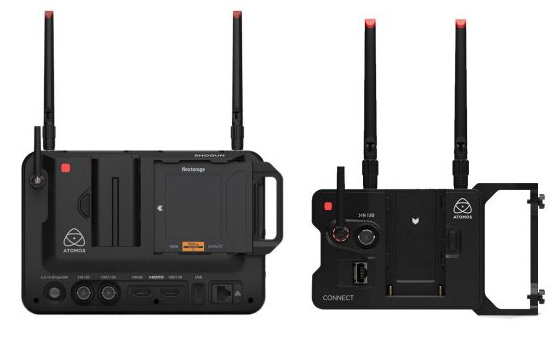 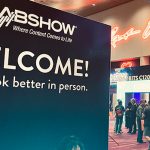 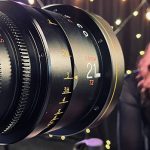 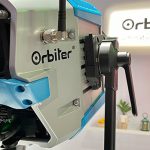 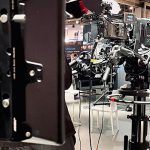 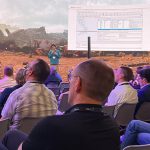 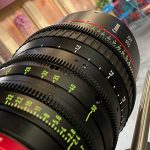 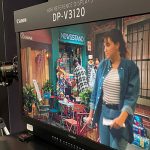 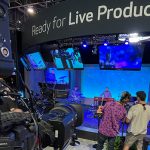 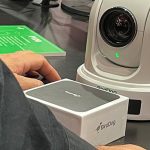 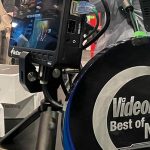 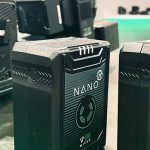 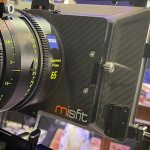 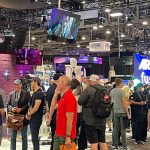 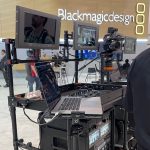 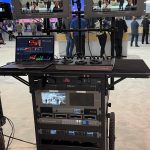 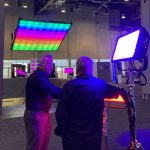