As the acclaimed FX series "Sons of Anarchy" nears its finale, director of photography Paul Maibaum, ASC continues to rely on solutions from Anton/Bauer, Litepanels, and OConnor during the production’s stage and location shoots in Southern California. The DP and his crew have trusted the gear to perform throughout all seven seasons of this hit show.

In a recent interview, the TV series' DP Paul Maibaum shared his experience using various LED solutions from Litepanels, as well as the industry standard O'connor heads and support and Anton Bauer batteries used to power the Arri Alexa and the Sony F55 on which the show was shot.

This is yet another award-winning TV series using the industry leading LED technology from Litepanels. See more of his interview below.

Maibaum has been the show’s director of photography since the second episode of the first season. Created by Kurt Sutter, Sons of Anarchy explores the lives of members of an outlaw motorcycle club in California’s Central Valley. The drama has been the highest-rated series in the history of FX.

“Sons of Anarchy is like a modern-day Western with vistas and composition driving a look that harkens back to the movies of John Ford and Spaghetti Westerns,” Maibaum says. “Only on this show the horses are motorcycles, and the code of the west is the code of the club.”

The challenge of developing the look for the show was to make it “natural, not too slick,” he notes. “Handheld gives the narrative a feeling of immediacy that’s organic to the story. There are many non-verbal, dramatic elements that are signature shots of the show; it’s not rushed, in the sense that we like to get the reactions of the characters.”

Maibaum is a long-time user of OConnor fluid heads and Litepanels LED lighting fixtures. “I cannot remember a project that I have worked on where there weren’t at least two OConnor heads, going back to the days of the OConnor 100, and I have used Litepanels’ Ringlite Minis, MiniPlus and 1×1 LED panels almost since they first came on the market,” he notes.

On Sons of Anarchy, Maibaum has a pair of ARRI ALEXA cameras as his A cameras with one or two Sony F55 CineAlta cameras supplementing the 1st unit or serving as a two-camera package on the 2nd unit. Angenieux Optimo Zoom lenses are deployed to enable operators to switch back and forth from handheld to studio mode and stabilized camera moves with minimal downtime between modes. Maibaum notes that approximately 60% of the show is shot handheld, splitting the rest of the scenes evenly between dollies and camera stabilization systems.

Location and studio production are evenly split during the seven- to eight-day shooting schedule, with the studio housed in a converted warehouse in North Hollywood and locations throughout Los Angeles. 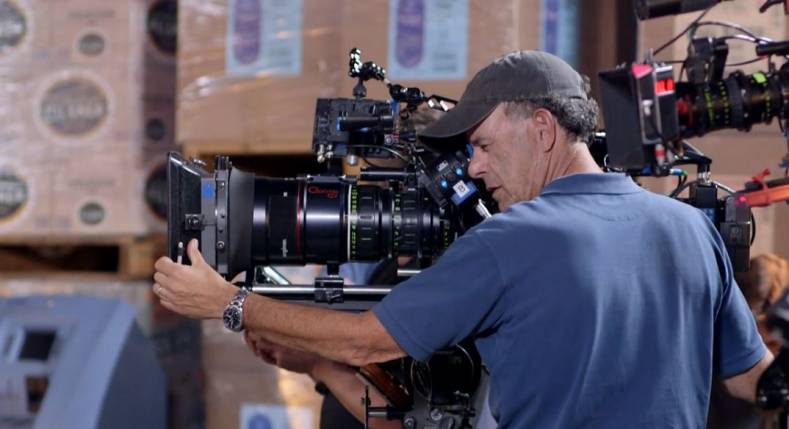 OConnor 2575 fluid heads, the flagship of OConnor’s Ultimate range of fluid heads, have been part of Maibaum’s camera package since the outset of production. “It is the fluid head of choice for every operator who has been on the show,” he reports, citing the variable counterbalance and drag as the fluid head’s most outstanding features.

“The OConnor head is easy to use, and resetting the sinusoidal counterbalance is a simple step. It’s easy to add more or less drag and tension so the operator can easily adjust to his or her needs,” Maibaum explains. “The ALEXAs and F55s weigh approximately the same, but the lenses change and they can weigh more than the camera. OConnor makes it easy to adjust with a change of lens and to go from shoulder to dolly to camera stabilization systems. It makes it easy to point your camera where you need it. The show’s signature shots include large masters, high angles and close ups. OConnor makes this possible.”

Litepanels fixtures are prominent on the show with Ringlite Minis and the MiniPlus – popularly called “bricks” – as well as 1x1s playing key roles in the lighting package.

“They’re invaluable,” Maibaum declares. “They work alongside all of our other lighting instruments, whether tungsten or HMI, on stage and on location. They’re lightweight, and the ability to run on battery power, along with their dimming capabilities, makes them essential tools in our lighting package.” 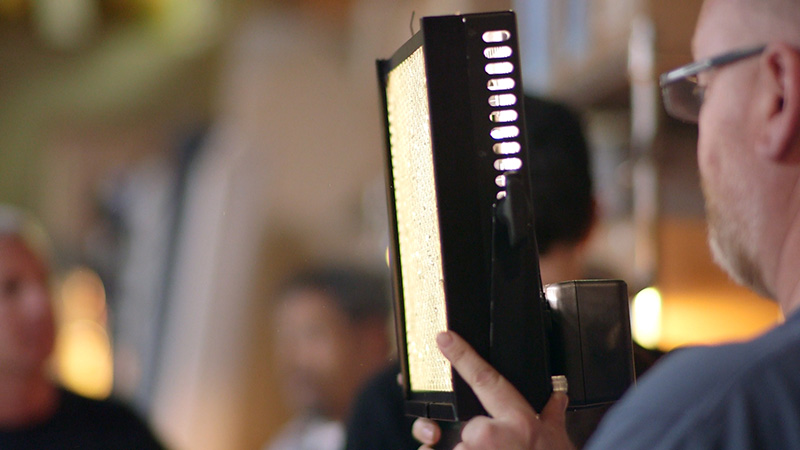 He recently tested the new Litepanels ASTRA 1×1 Bi-Color panel on the show. “This light is a marked improvement over the current 1x1s, and that’s saying a lot because they are one of my favorite lighting fixtures,” he adds. “The output of the ASTRA is surprising. Recently, I was able to use it as a fill light during some insert car work, filling the actors’ faces in broad daylight with the fixture projecting from roughly 8 feet from the subject’s faces. It was much brighter than the original light that we planned to use.”

The DP turns to the Ringlite Minis on the cameras about half the time. On the set, he reports that the 1x1s hang quick and easy – “they’re a solid, good-looking light; from flood to spot it’s easy to narrow the beam.”

Litepanel MiniPlus bricks are often used for eye light. “In scenes where lighting is sketchy, I’ll tell the team to add a ‘ping’ – or place a ‘brick’ to brighten the eyes,” says Maibaum.

“Litepanels gear is an essential element in my bag of tricks,” adds gaffer Tony Anderson. “The freedom of battery-powered lighting has saved me many times. When the DP needs ‘one last thing,’ the 1×1 is my go-to instrument. I have also worked with the ASTRA and am very impressed with the versatility and output of this head. It has enough output for bounce keylights yet is light enough to rig just about anywhere.”

Anton/Bauer batteries fill many mobile power needs for Maibaum’s crew. They use the award-winning CINE VCLX as the main camera battery for the ALEXAs and F55s when on dollies or cranes. The DIONIC® HC and HCX batteries act as a power supply for the handheld cameras and Litepanels 1x1s, and also power the wireless video assist.

“What I like about Anton/Bauer batteries is that they charge quickly, don’t lose their charge, and the digital readout tells me how much power is left all the time. They’re also lightweight and attach on and off quickly to the camera or light,” Maibaum points out.

No matter how many surprises Sons of Anarchy has had in store for fans over its seven-season run, behind the scenes Vitec Videocom brands have delivered consistently unsurprising results.

“I don’t believe we would be able to complete our day’s work within the time allotted if we did not have the complement of Vitec equipment that we employ on virtually every set up on an average shooting day on Sons of Anarchy,” Maibaum concludes.

At Visual Impact we are official resellers for all Litepanels, O'Connor and Anton Bauer products, as well as official authorised ARRI and Sony dealer serving the broadcast industry for over 25 years. For all your Litepanels, O'Connor, ARRI or Sony F55 needs, our Lighting and Large Sensor Specialists are standing by, so drop us a quick call at 0208 977 1222.